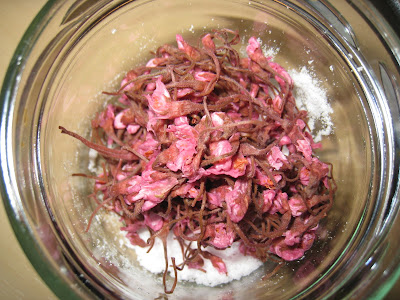 While reminiscing of my travels in Japan (around this time of year), we decided to create a "Passport to Japan" series, where this season's spotlight flavour is Sakura!

Floral with a salty, tangy bite, very much like Japanese preserved plums or Ume actually. Hence, it is not surprising that the 2 get paired rather frequently in culinary matrimonial bliss. This time, with the help of some friends, I got myself a batch of sakura no shiozuke!
During our R&D, the flavour of sakura was overthrown by that of the white acacia honey we used, so I paired it with white peach, aloe vera and drops of dragonfruit juice for colour. After a month, I'm just blown away at how strongly the ferment smelled of peach and how the flavours go so well together! Some of the mid notes remind me strongly of cotton candy....yum! I just had it with some iced water and love the texture of aloe, peach in the brew!

Over 10 years ago, while still living in the United States, I got to know of cured cherry blossoms from a dear friend and discovered that the Japanese pickle the blooms and the leaves for food, as an accent for drinks and desserts, and even drunk as a savory tea called sakurayu (桜湯).

Therefore, I'd like to share my 11 year blog post on how to make your own Sakura no Shiozuke (edited for clarity). As there is little information provided in most cured sakura recipes on the types of sakura to be used, my little food experiments below may contribute some insight if you are able to get your hands on some.
-Winnie

Piqued by the thought of making my own cured sakura, I enlisted help in searching for recipes. The problem is, most recipes do not specify what variety of sakura tree the blooms should be used from. K and I saw a variety by our workplace called Somei Yoshino, which has light pink flowers with 5 petals. (and proceeded to pluck away. I am assuming they are organic :P) Here's what we have in a small cup for the curing: 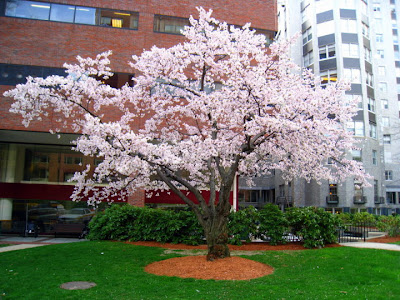 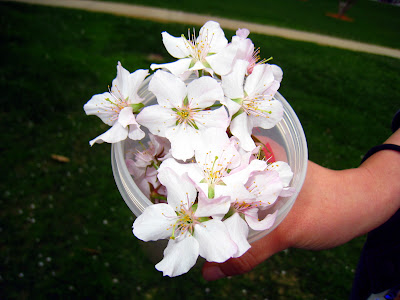 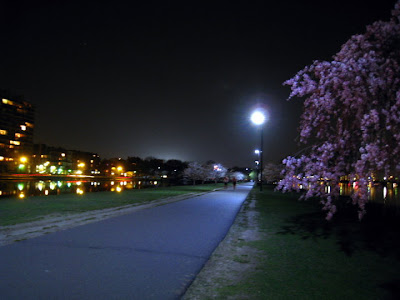 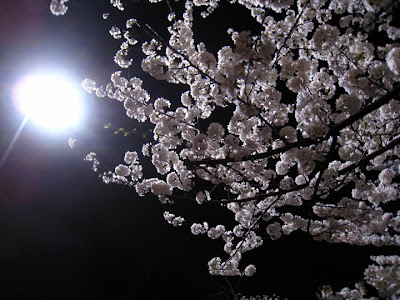 To make the sakura no shiozuke, you need:
Step 1: Wash the flowers carefully and remove the waxy (red) bits by the stems. Drain well and blot with a kitchen towel. 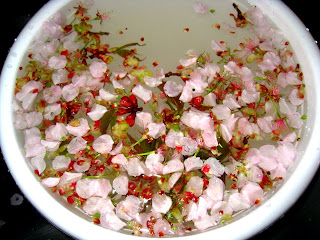 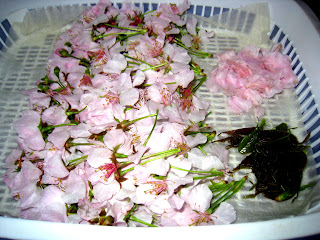 Step 2: Scatter sea salt on top of your flowers. Shake, but do not mix or the petals could separate from the stems. Cover with clear kitchen wrap and place a heavy jar on top of the blooms to force liquid out while soaking them in a brine. (If you have a Japanese pickling press, all the better) Leave overnight or for 1 day. 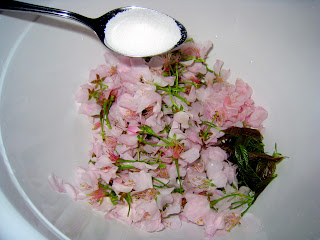 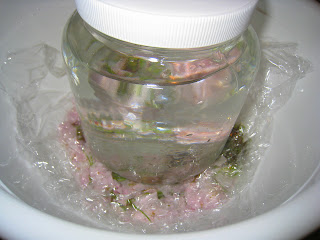 Step 3: Squeeze the flowers out of excess fluid and place in a jar or bowl. Add the plum vinegar and allow to gently ferment for 3 days. 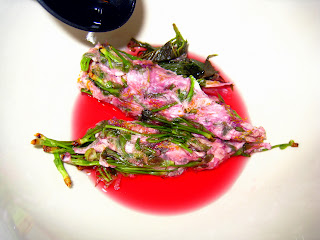 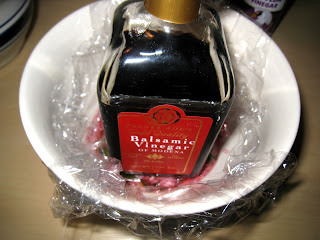 Step 4: Line a baking tray with kitchen towel. Arrange the flowers and allow to dry in a shaded area. (~3 days)
In this case, my error was in picking fully-open blooms. After the pickling and pressing, the petals fell out, exposing pistils and stamens. Bald (hage) flowers are not pretty. I ended up plucking the petals off, then rolling them into tiny pearls before drying them. It is my vision that these pearls would unfurl into the steaming hot tea. We'll see if that happens. *Update: they did! 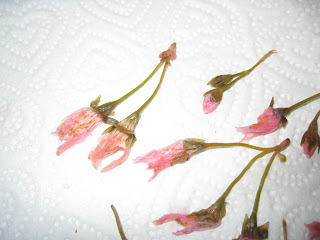 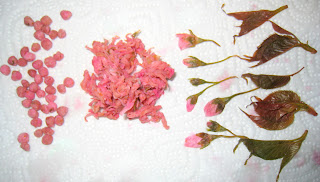 Step 5: Place the blooms in a small jar and add sea salt for storage. Voila! Your very own salt-cured Somei Yoshino Cherry blossoms! 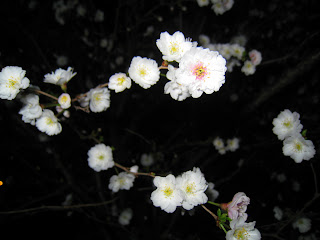 For more sakura varieties, K and I went night sakura-picking after our wine and cheese party at work. While lovers were whispering sweet-nothings to each other in the dark, the both of us took constant flash photography and suspiciously hovered around the sakura trees picking at the buds. :) I then tried this recipe with Shirotae Cherry and a darker pink species called Shidare-zakura (Weeping Cherry).
(Shidare) 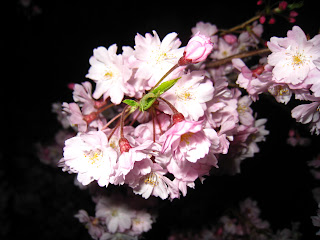 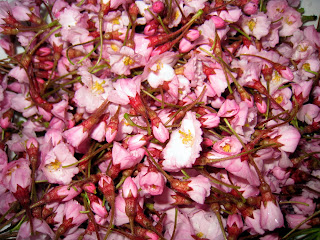 Of the three, Shirotae was white, Somei Yoshino was pale pink, and Shidare was the darkest pink (and most similar to the recipe).
However, in terms of aroma, Shirotae was most aromatic, followed by Somei Yoshino. Shidare smelt the least alluring of the 3 varieties I picked. Trade-off between color and aroma! Well at least I have 3 different flowers to mix and match. 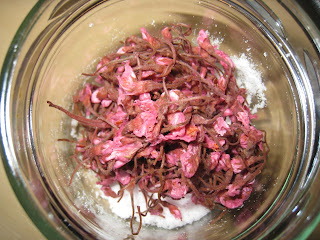 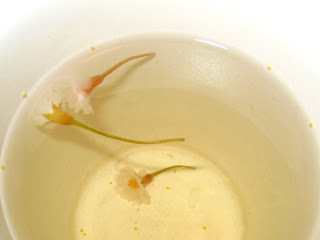 *Update: Once the curing process was complete, I plopped a couple off Shidare flowers into hot water and behold.. they did open up a little. I was a little disappointed that their pink color was leached into the tea and that the tea wasn't reminiscent of the sweet plum smell from the salting. In fact, it smells like cut grass, which really isn't very appetizing, taste-wise. Use hot green tea to mask the zing, perhaps? I will try them in onigiri (rice balls).
(Yamazakura) 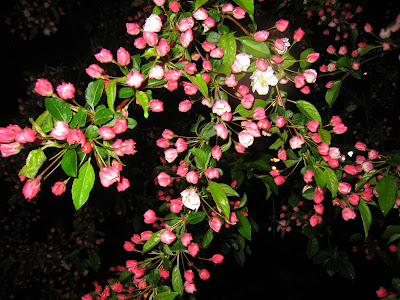 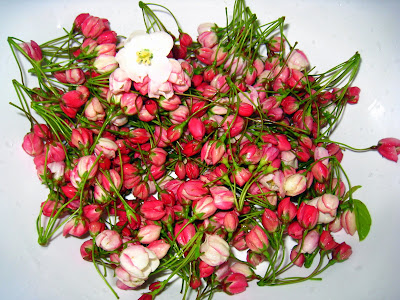 Why Parents Need to Incorporate Probiotics into their Child's Diet

Can children take probiotics? How much should they start off with? Well, it depends on individuals. As a rule of thum...
Read More

Five Steps on How to Boost Your Immune System During the Coronavirus Outbreak
Mar 13, 2020